Travel in the current age has become more of an inward journey than a geographical or cultural one. The lobby of every urban hotel now resembles the airport one left to get to it, and all airports are in the end the same. Cities borrow ceaselessly from one another’s cuisines, architectures, and entertainments, until only in some remote hamlet in, say, Indonesia can what we used to call culture shock be experienced. What travel tells us is who we are, not what “there” is.

My wife and I recently traveled to Australia. My wife loves Australians, who confirm to her that her own virtues of bottomless affability and generosity are shared by large, if isolated, populations of people. I myself tend to favor Europeans, whose wariness and cynicism mirror my own, and who share my penchant for taking meals too seriously.

When our forebears traveled great distances, they did so in vehicles slow enough that their passage through time zones allowed their body-clocks to keep up. Now you can leave San Francisco one night and, after 15 hours, arrive in Sydney two days later. How you react to this speaks volumes about you as a person. Some find the International Date Line a useful human fiction, like nation-states, or marriage. To others it represents a perversion of nature, a betrayal of fundamental principles, akin to the claim that our galaxy is only one of many and they are all rushing away from one another for no discernible reason. What’s left of certainty when whole days can vanish just because you went on vacation?

In any event, what we found in Sydney, apart from affable Australians, was how very much Sydney resembles our old home town of San Francisco. Green hills running down to blue water, brilliant landmarks, cafes everywhere. It’s basically San Francisco without the in-your-face homeless or the hauteur, the San Francisco of a childhood dream, clean and unaffected, pre-Hitchcockian, a San Francisco full of people who are smiling for reasons other than that they found an apartment near a Google bus stop, a San Francisco still alluringly unconscious of her own natural beauty, before she looked in the mirror and decided she was really hot.

What’s absent from Australia is that anxiety of over-achievement that has come to seem uniquely American, the thoroughly democratized hubris that can make such routine activities as boarding an airplane seem like the Hunger Games. Aussies just don’t care to impress you or get ahead of you in lines. In fact, the idea of impressing you never seems to have entered their minds, any more than the idea that you might be trying to impress them. They’re just enjoying life, and hope you’re enjoying yours. 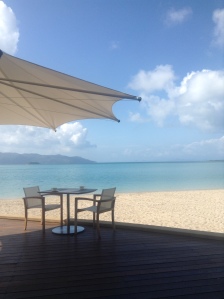 At a recent breakfast at a resort near the Great Barrier Reef (see our review of the One and Only Hayman Island), we ate our perfectly good buffet food and watched the cheerful chaos around us, Aussie children and their parents preparing for the day’s watersports, the waitstaff amiably overwhelmed and clueless. Then an older American couple of clearly urban extraction sat down at the table next to us and proceeded to issue orders, as only entitled Americans can. They had an attaché of some kind following them around, frantically scribbling their demands on a little pad. Will the excursion boat be covered? Where was the masseuse trained? Oh, Thailand? For how long? I couldn’t make this up; they actually wanted to know for how long their masseuse for that afternoon had trained in Thailand.

I fear that eventually Australians will have seen this so many times that they will assume it’s appropriate or even sophisticated behavior, and the jig will be up. An entire continent of formerly pleasant, unassuming individuals will join us in our quest for world domination, gluten-free food, and the perfect Thai massage. They too will criss-cross the Pacific for the sole purpose of accumulating frequent-flyer miles, and will allow the Great Barrier Reef to become a warm, dead stew. They will learn to sneer at their own cooking, and their young will decide that they want to start tech companies and take them public, rather than work as charmingly inept waitstaff at beautiful reef-side resorts. They will come to view strangers as potential threats to their superiority rather than as opportunities for mutual amusement and bonhomie, and they will get really good at real estate. They will, in short, become Americans, at which point we can perhaps offer them statehood and a coherent plan for Daylight Saving Time, which evidently has eluded them thus far.

Still, for as long as they last, I’d trade San Francisco for Sydney any day, and don’t mind at all that my masseuse has a Kiwi accent and has never been to Thailand. And that Reef, while it lasts, is not to be missed.