Few high-end travel aficionados would pick West Virginia as a likely spot for a destination resort.  Sandwiched as it is between north and south, east and Midwest, it seems neither here nor there, and tends to conjure images of backwoods Appalachia rather than upmarket sophistication. The state’s slogan — “Wild, Wonderful West Virginia” –carefully omits another “w”:  Wheeling, de facto capital of the rustbelt.

Yet West Virginia is home to one of the oldest and grandest resorts in the United States: the Greenbrier, an immense yet stately hotel that looks like the White House on steroids, situated in a sprawling, impeccably-manicured parkland dotted with 19th century cottages and boasting a world-class golf course, fine clay-court tennis facilities, riding stables, skeet ranges, fly-fishing, and what is surely one of the most beautiful infinity pools between the coasts.

The Spoiled Guest’s impression of the Greenbrier had been formed years ago in the course of several obligatory visits to attend some of the many corporate conferences that are regularly drawn to the capacious hotel and lovely grounds.  Though these stays left an impression of old-world grandeur on an almost preposterous scale, they had provided little time or opportunity to experience the place as leisure traveler might.  So when friends invited us this August (2015) to join them on an impromptu getaway to the Greenbrier, we barely hesitated.

The resort’s location is both a liability and an asset, being impossible to reach by air except via a nearby private landing strip.  It’s a four to five-hour drive from any of Columbus, Pittsburgh, or Washington, D.C., the nearest cities of consequence, though Richmond, Va. is a mere three hours away by car, and those with stomach for puddle-jumping could probably fly into Roanoke or Lynchburg, Va. and cut the drive to under two hours.  Amtrak still runs trains to White Sulphur Springs (the nominal “town” in which the Greenbrier is located) three times a week, in a rather flaccid nod to the days of yore when dignitaries and their belles regularly rode the new rails west from Washington to imbibe the allegedly salubrious – if smelly –sulfur spring waters and oak-forest majesty that were the area’s original allure.

You get the idea: you can’t get there very easily from anywhere.  But that’s part of its charm.  Our drive from the west took us into increasingly mountainous terrain, through vast forested river valleys that could have been mistaken for tracts of Colorado wilderness had the trees been evergreens rather than ash and oak.  One forgets that much of West Virginia is like this: deep, mostly untouched Appalachian forest riven with whitewater streams, once home of the Shawnee Indians, who called this land “the Endless Mountains.”

History as well as geography defines this part of the world, and the Greenbrier.  The resort lies in what was a hotly-contested border between the North and the Confederacy during the Civil War, and in those days was considered “the summer capital of the Old South.”  West Virginia seceded from the Confederacy, just as the Confederacy had seceded from the Union, and White Sulphur Springs, while heavily populated by Confederate sympathizers, was swept up in the anti-slavery movement, and in the war itself.

The hotel became a military hospital during both that conflict and World War II (when it also briefly served as an upscale internment center for German and Japanese nationals).  During the Cold War, the hotel famously housed “the Bunker,” a huge underground facility behind blast doors, to which Congressional officials were to flee from Washington in case of nuclear attack (it was de-commissioned in 1995).

You can’t arrive on the property without feeling you have entered the South, and a rather genteel and socially-stratified version of it at that.  Black bellmen still man the broad columned entrances, black waiters still stride through the formal dining room in footman’s livery. The original hotel building was fond

ly called “The Old White.”  It is that, but you can’t help but think that the name had – and has — more than one meaning.  Nonetheless, there is not a Confederate flag in sight.

The Chesapeake & Ohio Railroad (later CSX) acquired the resort in the early 1900s and turned the Old White into the monumental hotel it is today, feeding a constant stream of guests into the West Virginia woodlands via what were then its passenger trains.

But the next infusion of life into the storied property was perhaps the most defining for the modern visitor.  After World War II, a young New York interior designer named Dorothy Draper, who had recently refurbished the Carlyle Hotel in Manhattan, was hired to restore the hotel to its former elegance.  What she did was turn a drab, dated mausoleum, most recently a hospital and jail, into a giant canvas of color and panache, full of bold floral motifs and stark geometrics, whose signature style has lasted to this day.  The place is a living museum of a certain brand of indulgent, vibrant, feminine visual sensibility that could only have found acceptance after years of drab wartime deprivation.  It still works; you smile when you enter the place to see the fun that was being had, and still is.

The common spaces are vast, more like the palaces of Europe in scale than what is 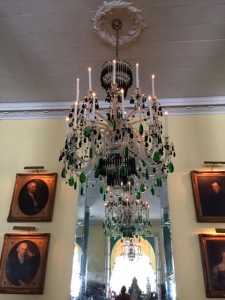 needed for a mere hotel, and you feel grand just moving through them.  There is an explicit dress code that harkens back to an earlier time: coat and tie for gentlemen in the dining room, no shorts after 5 pm, and God forbid you should be seen in your robe and flip-flops on the way to the indoor pool.  If you’re not in a collared shirt, you should probably be working in one of the many gardens.

Our room was disappointingly small and dark, but our friends’ was what I remembered: spacious and bright and splashed with the color of Draper’s wild prints, or good reproductions thereof.  The biggest concession is the bathrooms which, though serviceable, all bear the same small footprint that was de rigueur in the Eisenhower years.

he scale of the hotel infrastructure would seem excessive were it not situated in even grander grounds, which easily absorb it and reinforce its gentility.  Walkways meander through ancient oaks, down past the Doric cupola that still shelters the original sulfur spring, through the pristine golf course where Sam Snead was pro, along the rows of antebellum cottages lovingly preserved and reeking of history.  Our few days in mid-August were unseasonably mild, adding to the otherworldly air of an arboreal heaven.

Meals may be had in a variety of venues, from the diner-like setting of “Draper’s” in the basement of the hotel, to the clubby “Sammy’s” overlooking the golf course, to the grand, old-world opulence of the formal dining room – actually a series of soaring, chandeliered spaces occupying an entire wing of the hotel and manned by seemingly hundreds of amiable waitstaffers.  Wine lists are extensive and fairly priced. The food, while predictably tending toward southern heaviness, is surprisingly good given the huge volumes in which it must be produced.  All this for a price that seemed very West Virginia.

The scale of the place is, indeed, not without its downsides.  Large corporate conference groups wash through every few days, busloads of foreign tourists come and go, cameras and smartphones clicking away, and American resort-wear follies are at every hand.  It is , after all, an American  landmark frequented by the merely curious as well as actual guests. But the hotel is so vast that it absorbs the crowds with grace, and most visitors enter the place with an attitude of reverence that its scale and grandeur and history almost command.

The Greenbrier was bought from CSX some years ago by West Virginia billionaire Jim Justice, a coal and agriculture mogul who seems to be a good steward.  We saw a charming new “chapel” – actually a fairly large church by most standards – in its final stages of construction downhill from the cottage where Andrew Jackson and successive Presidents once summered; one of the chapel’s first uses will be as the wedding venue for the owner’s daughter. We were a bit appalled when we heard he’d installed a casino in the hotel, bit it’s discreet by casino standards, stashed in the lower reaches of the place, down near the Bunker, where you can find it only if you go looking.  Every night they stop gambling at 10 pm for 15 minutes so that two pairs of young dancers can descend the sweeping double staircase into the casino, dancing to something called the Greenbrier Waltz. The night we were there, one of the dancing couples was bi-racial, a sight that would have caused a small riot in Dorothy Draper’s era. It brought tears to the eyes of our friend’s wife, and mine too.

Go, if you can, at least once.