The Gritti Palace from the Salute basilica

The word “picturesque” is wholly inadequate to describe the staggering beauty of Venice on a sunny afternoon in the fall, the ancient palazzi and cathedrals lining the Grand Canal, sunken streets snaking off under arched stone footbridges, the cries and songs of the gondoliers as they wend their way through the canal traffic, busy as a highway at rush hour.  Venice is a world unto itself, a city with no analogue anywhere on earth.

Our water taxi from the rail station drew up by the Gritti Palace private dock in front of the afternoon lunch crowd on the deck overlooking the canal.  Disembarking and guided by white-clad staff into the cool interior, with the dome of the Salute looming downstream and Peggy Guggenheim’s mansion just across the canal, you can’t help feeling like you’re in a movie starring Cary Grant and Audrey Hepburn.

The Grand Canal and the Santa Maria della Salute basilica

The Gritti Palace is a hotel of a smaller scale than the word “palace” suggests; but then one must remember that it was built by diminutive Venetians in the 15th century, who had less need of high ceilings and big bathrooms than we modern giants.  Hard by the Grand Canal, a five-minute walk from San Marco Square, it’s an elegant old-world hotel in one of the oldest of worlds: the byzantine archipelago of Venice.

Check-in is efficient, the common rooms wildly ornate yet inviting, and our small suite charming enough, though view-less and a bit overcrowded with pointless design-statement footstools that we soon move to one side.  The compact bathroom strains to contain a separate bath and shower along with two opposing sinks so close that my wife and I bump rumps when we both stand in front of them.   All this for a budget-busting 2300 Euros per night.  But then, if you’re on a budget, you probably shouldn’t be here.

The Gritti Palace underwent a $50 million renovation in 2011 under the guidance of American designer Chuck Chewning, and it shows, with all trace of stuffiness expunged and replaced by the illusion that you’ve just exited a time machine into another century when the frescoes are still drying, the brocade freshly woven, and the gilt just recently applied.  There’s the relatively uncluttered Bar Longhi, lit by Murano glass sconces and festooned with 18th century paintings by that artist, that opens onto the canal-side deck; a rooftop dining and bar area (closed this late in the season), and a fine spa where you’re plied with Aqua di Parma products and reasonably-priced (for here) massage services.  A workmanlike but unremarkable dinner is served in the ornate, brocaded dining room next to the canal, and during breakfast and lunch, dining hotel patrons on the canal-side deck and tourists in their passing water buses and gondolas gawk at each other with equal fascination.

The staff of the hotel works hard to please, and work they must, as the clientele that the renovation has attracted tends to be of the overly-entitled American type, interspersed with Italians and Germans and Brits – and the inevitable Chinese – who seem to have studied haughtiness under the French without learning much about dress or manners.  One overweight American doyenne wheeled into the dining room for a hearty breakfast one morning in her bulky motorized chair, causing one to wonder how she planned to get around Venice, which has thus far remained unmoved by the access requirements of the Americans With Disabilities Act. 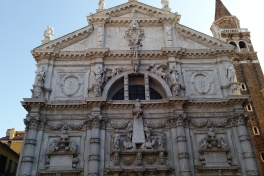 The Chinese, however, are the true new ugly Americans, and they are all over Venice, viewing the city exclusively through the screens of their smartphones, entire families crowding individual gondolas.  In fact we did not see a single gondola that had not been commandeered by a large Asian contingent.

But much of the charm of Venice is that it’s a walking city.  Its flooded streets make cars useless, so boats and walkways are the only means of conveyance, enhancing the sense that life here hasn’t changed in centuries. You can traverse the city on foot from north to south in a little over an hour, assuming you don’t get lost in the maze of its million narrow byways, each with a name you can’t pronounce and instantly forget.

It’s also, quite resolutely, a tourist city. Even in October, when we were there, the silk road from San Marco Square across the Accademia bridge is choked with hordes of tourists from around the world, brandishing selfie-sticks and dragging their roller bags up and down the stairs of the centuries-old footbridges.  It’s a wonder that a trench has not been worn into the ancient stones.

As is true all over Italy, dining out is an art form here, and we were lucky to be directed to the following culinary high-points during our stay:

Da Ivo – cozy, old-school northern Italian a short walk from San Marco Square.  You can enter from the charming, narrow street or, if you’re embarked, through a second door that thoughtfully opens onto an aqueduct.  Meats are the specialty here, and with only a dozen or so tables, reservations a must.

Quadri – thoroughly modern cuisine in a romantic pair of rooms overlooking San Marco Square.  My wife was introduced to a leg of goose that changed her view of what to fix for Thanksgiving, and  I had a linguini with shaved white truffle so delectable it brought tears to my eyes (though the superb Tignanello super-tuscan red might have had something to do with it).

Antiche Carampane – specializing in fish, and reputed to serve the best in the city, this cozy, welcoming spot’s only downside is the difficulty of finding it after you’ve slogged your way through the scruffy commercial mayhem of the Rialto district.

Venice is a city crowded with art galleries and museums of every description, usually housed in grand old palaces or homes.  Our favorites this trip included the Fortuny (aggressively modern installations in a beautiful ancient Gothic structure), the Palazzo Grassi (with an airy atrium, currently hosting a dazzling retrospective of the French pop artist Martial Raysse), and of course the Peggy Guggenheim Collection (fronting the Grand Canal, with its eclectic array of modernist offerings, a relatively tranquil sculpture garden, and a pleasant in-house café).

No matter where you stay, go to Venice at least once in your life. Despite the unavoidable crowds and laughable expense, it’s still one of the true wonders of the man-made world, and the most direct connection to a grand, centuries-old Western civilization that can be experienced anywhere on the planet.

2 thoughts on “Venice: the Gritti Palace”