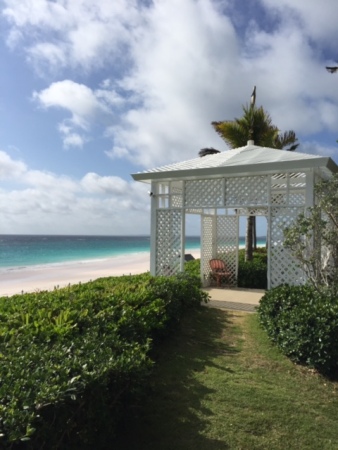 A few minutes flying time east of Florida lies the archipelago of the Bahamas, still part of the British Commonwealth, still nominally ruled by Queen Elizabeth, yet populated by the descendants of African slaves brought here by Crown Loyalists after the War of Independence, and of freed slaves who escaped to the Bahamas after the American Civil War. Now that’s a history to reckon with, and one that must account, in part, for the palpable pride of today’s native Bahamians.

Appearing on a map like an exploded diagram of an intricate machine, the Bahamian islands are strewn over a huge swath of the Caribbean, and come in all shapes and sizes. How to decide among them? The Spoiled Guest had been to Nassau as a boy, but had never set foot in the Bahamas since. As luck would have it, a return was mandated by a family wedding, which took place this May, 2017 among the “out islands” northeast of Nassau, on tiny Harbour Island, a stone’s throw across blue water from North Eleuthera.

The islands of the Caribbean, curving like the spine of a great sea beast from the southern tip of Florida down to Venezuela, present a bit of conundrum to the seasoned –or spoiled — traveler. They have in common their ease of access from the U.S., volcanic topography, lush tropical vegetation, turquoise waters, and profusion of beautiful beaches, side-by-side with their history of colonial exploitation by European seafaring nations (English, Dutch, French, Spanish — they all had their way here) and a consequent persistence of third-world poverty only partly alleviated by a near-complete reliance on tourism.

On most of these islands, the thoughtful visitor can’t help but feel like a latter-day colonialist as he or she basks on a beach with other white Americans, being waited on hand and foot by a staff drawn from the local black citizenry, who may or may not have reconciled themselves — or their country — to the economic asymmetry of the whole arrangement, much less feel grateful for it.

Still, we go, because there are few settings in the world more beautiful and more thoroughly associated with the concept of a vacation than a sun-smitten Caribbean beach, and none that are easier to get to from our chilly, mostly landlocked United States. We go, and hope that while we’re indulging ourselves in the beauty of other peoples’ homes and being served by them, we’re doing them more good than harm.

We flew directly into North Eleuthera from Florida, landing on an airstrip not much longer than a city block and trundling up to one of the most unprepossessing “international” airports in all of Christendom. I have it on good authority that most living rooms in America are bigger than the waiting room of North Eleuthera International.

A short taxi ride took us to a dock where water taxis regularly make the ten-minute trip between North Eleuthera and Harbour Island, a spit of land only three miles long and a half-mile wide at its widest, whose eastern beaches face across the unobstructed Atlantic toward Africa. Another taxi took us through tiny, funky Dunmore Town, frozen in time between the days of British rule that gave it its name and the onset, last mid-century, of modern tourism, past a big pink Anglican church, past a prim public school (located, a sign proudly proclaimed, in a “Positive Time Zone”), and up a trimmed green hill to our hotel, the Dunmore. 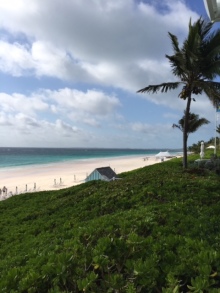 The Dunmore is one of those small hotels (only 14 units) that enjoys a devoted, recidivist clientele and whose management is keenly aware that a large part of its appeal resides in its resistance to change, its capacity to deliver the same predictable, familiar experience year after year, decade after decade. The risk is that this can result in a self-satisfied, cult-like loss of objectivity and a gradual slackening of service standards (see, e.g., another Caribbean time machine, the Meridian Club). But perhaps in part due to a recent change of ownership into the hands of a group of investors from Dallas, the Dunmore seems to have avoided all that. We were greeted warmly and professionally in a reception area that closely approximated the living room of homey seaside bungalow, furnished in rattan and plush prints and adjoining a small, cozy bar. 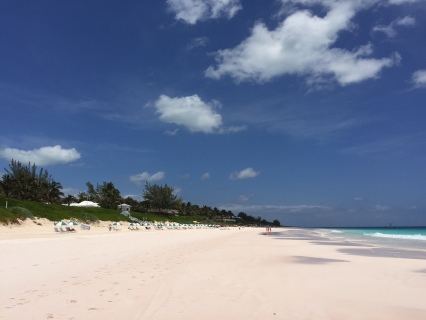 aptly been called one of the most beautiful beaches in the world. Stretching most of the eastern length of the island, this wide expanse of soft, powdery sand is insistently described in all the tourist materials as “pink,” but looks merely off-white except at dusk, when it does assume a somewhat rosy hue. It’s an odd exaggeration of a natural wonder that needs none. This beach alone is reason enough to visit Harbour Island, no matter how far you need to go (the wedding party we were joining hailed mostly from California).

The exquisite beach fronts the gentlest of surf lines this side of the Gulf of Mexico, its waters of an almost unnatural neon turquoise. From the vantage point of lounges under our beach umbrellas in the intense Caribbean sun (and we had only that for the duration of our week’s stay), the juxtaposition of the white sand, benignly blue sea, and cerulean sky was almost dizzying, and at dusk, when the promised pinks streaked sky and sand, the beach assumed an even dreamier beauty. 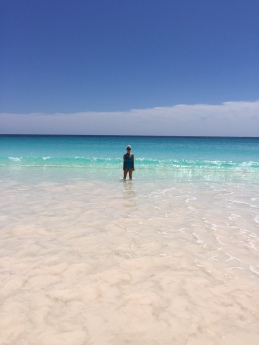 Our “ocean cottage suite,” half of a two-unit bungalow just uphill from the main clubhouse (the Dunmore was in fact a private club for most of its history since its founding in the ’40’s), was comfortably furnished in simple, old-school island style, highlighted by a sizable bathroom with twin sinks, water closet, and separate tub and tiled, walk-in shower, and Molton Brown toiletries, and the bedroom offered, rather surprisingly, one of the most comfortable beds we’ve experienced in all our spoiled travels. Though the decor could use some functional updating (a drawer in the bathroom needed repair and the plastic nightstands are deserving of banishment to designer purgatory), any concerns we might have had that a place that is at some pains to refer to its past might stint on modern comforts were quickly dispelled. Nighty tariff in the shoulder season is around $750, plus a 15% gratuity fee and a 7.5% local hotel tax. 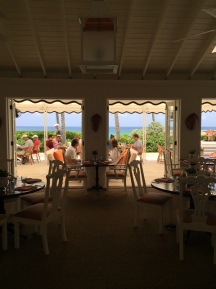 Dining at the Dunmore

Meals are served in the small, charming dining room or on the canopied, open-air terrace overlooking the beach, and were uniformly excellent, emphasizing local seafood as one would expect (the trio of conch fritters, conch ceviche, and fried conch is not to be missed).

The staff was consistently friendly, witty, and efficient, and several staffers felt like instant friends. However undeservedly, I got a nightly “cool” handshake/thumbgrip from Henry, the genuinely cool bartender, and there were hugs all around on our reluctant departure. If there is lurking resentment of the rich white tourists anywhere on Harbour Island, it wasn’t detectable by the rich white tourists. 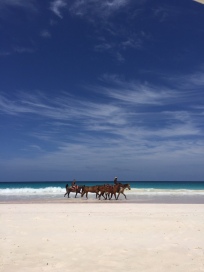 We drove in our rented golf cart (the preferred mode of transport on Harbour Island) into Dunmore Town to sample off-campus eating, and enjoyed the Landing, an atmospheric converted home run by an amiable proprietress, and the Rockhouse, up a steep flight of stone stairs from the narrow bay-front street and affording beautiful sunset views across the harbor toward Eleuthera. Meals at both were competently and tastefully prepared, though the Rockhouse is distinctly more upscale, and houses a small boutique hotel. Prices are reasonable for the Caribbean, but certainly not cheap. 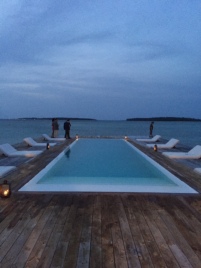 Pool at the Other Side

In counterbalance to the clubby charms of old places like the Dunmore, the “eco-boutique” hotel experience seems to be gaining a foothold here. Just across the bay on Eleuthera lies a small, nascent resort called, appropriately, the Other Side, an enclave of only six rustically opulent cottages and tented common areas tricked out in an of-the-moment, boho-chic, post-millennial decor that wouldn’t be out of place in Northern California, but seemed almost ironic in the Bahamas. And farther afield, atop a high lava outcropping along the coast of Eleuthera south of Harbour Island, sits a place called Ocean Talley, an even smaller cluster of buildings next to a striking whitewashed former lighthouse and reachable only by boat and dirt road, that recalls nothing so much as a slice of Santorini in the Aegean. Time will tell whether these new enterprises are a flash in the pan or harbingers of a future Bahamian resort experience that dispenses entirely with the Caribbean clichés.

For now, we’ll stick with the Dunmore, clichéd or not. And we do plan to return. 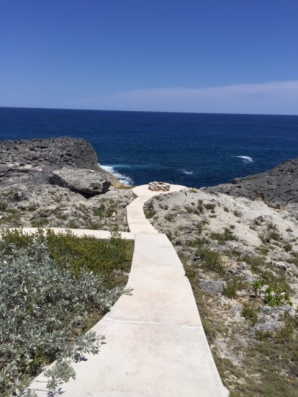